This year the season started very late. The sanitary crisis and the massive lock downs all over the world forced a lot of flight cancellations. The first climbers arrived on the island in June whether normally they would arrived end of March. By mid August everything started to return to normality. The climbing courses and personalized guiding started to pick up.

Patricia, Alain, Dominique, Max and Sandrine first contacted in January 2020 to schedule an intermediate sport climbing course in May. After the lock downs and flight cancellations we had to reschedule their climbing coaching course on Kalymnos for October 2020 .

Everything returned to normality around mid August. Climbers started again enjoying travelling and climbing. The climbing courses started to fill in.

Patricia and French team arrived at the beginning of October and we had a blast on Kalymnos !  An enthusiastic group of climbers.  Very dynamic, athletic and fit group on their early 50’s . All of the climbers where experienced and approached me for coaching. The group’s level was homogeneous. We worked on an individual level on their strong and weak points.

Evaluation of climber’s levels. Refreshing and evaluating their existing safety and climbing skills. Evaluate each climber’s weaknesses and objectives. Most probably first experience with some tuffa wrestling (stalactites climbing) !

Telendos island – An adventurous day starting early by taking the boat to Telendos. Practice your climbing skills on long sustain routes of 40 m and enjoy climbing above the sea in the peaceful island of Telendos! Developing methods for stamina ans on sight climbing. Learning tools to work on your mental strength and cruise on longer and sustain climbing routes

Day 4: Rest day. Ask us for more possibilities to discover Kalymnos beyond climbing on your rest day…

Arginonta and arginonta valley: The first half of they day everyone works on a small project and have the change to red point it,the views are remarkable on turquoise blue sea at Arginonta’s beach. On the second half of the day we worked on some more onsight techniques at arginonta valley.

All climbers at the end of the course where leading in confidence pushing their level from 6a to 6c ! 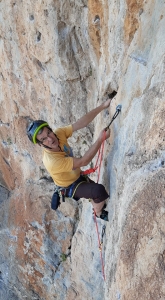 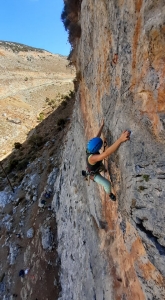 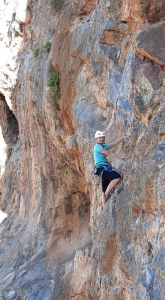 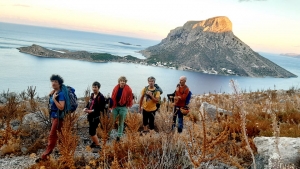 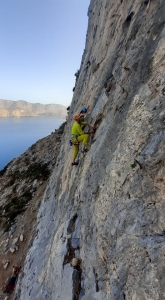 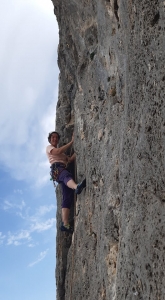